Chapel of Pain is an introduction to Mörk Borg for 1-4 players.

What's going on? In Galgenbeck, on twisted street, there is the shack in which they meet. Cry foul of light and damnations lament, the darkness shall bring all to black.

In the halls of the dead where flayed men wander, the darkness snuffs out the light. It tears the flames from candle and log.

An ass, broken beneath the yoke of the two-necked four-headed Basilisk, turns their eight eyes torn asunder as pain wells from deep within the city of death and the forgotten, reeking mounds of wasted human opportunity crawl madly through each street as they cry to their blind Arch Priestess Josilfa, whose shadow-sharpened scythe estranges head from trunk.

Rivers, crimson and fouled brown, seep endlessly to the halls of the Chapel of Pain, the voices of pitiless excrement cry out for what they do not understand – The Shadow King.

The Chapel of Pain is a hidden sanctum where cultists have surreptitiously called forth the Shadow King’s influence into Galgenbeck. The dark cauldron that they venerated and filled with the blood of sacrifices has shattered. Creatures of darkness have begun to spread from it, slowly snuffing out the lights and the cultists within. The Shadow King knows nothing of their sacrifices, but something darker was listening and the inky blackness that spills from the cauldron threatens to plunge all of Galgenbeck into darkness.

The characters are tasked with rooting out the cult and ending the darkness, and become trapped within the twisting Chapel of Pain as they battle the encroaching darkness and the broken souls they encounter.

Maps. Area mapped and ready for your VTT of choice. Grid, No Grid, and Notated options of all maps.

Adventure. Easy to follow Adventure that works as a one-shot or fits nicely into an ongoing campaign.

Chapel of Pain is an independent production by Dungeon Rogues (Kyle Shafer) and is not affiliated with Ockult Örtmästare Games or Stockholm Kartell. It is published under the MÖRK BORG Third Party License.

In order to download this game you must purchase it at or above the minimum price of $4.99 USD. You will get access to the following files: 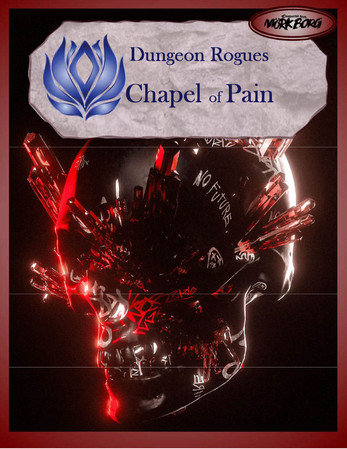